The Importance of White Clover to the New Zealand Economy 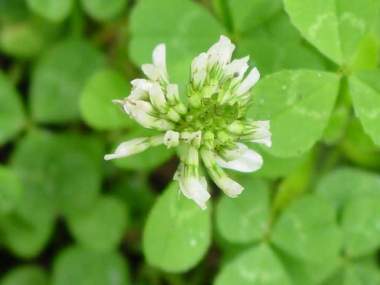 Quick links to contributions from:

Table 1: Breakdown of the Financial Importance of Clover to the NZ Economy 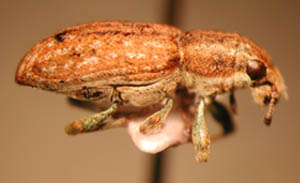 The clover root weevil (Sitona lepidus) is found throughout Europe and North America. The adults are 4-5mm long, brown to grey, and look similar to the closely related lucerne pest Sitona discoideus. They feed on clover leaves causing characteristic C-shaped notching of the leaf margins. The crescent-shaped larvae are legless. They range from 1-6 mm long, are creamy-white, with a brown head. They feed on clover nodules and roots, this causing root loss, ingress of disease and a reduction of nitrogen fixation.

The weevil was first identified in the Waikato by AgResearch entomologists in March 1996. MAF Regulatory Authority immediately surveyed the extent of infestation. It was recognised that the insect was distributed over 200,000 ha and eradication was impossible. Initially clover root weevil was found in 2 areas, one centred around Tauranga extending to the Waikato, and the other just north of Auckland. Currently the weevil appears to spread naturally about 35 km/year and is now found from Waipu Cove in the north, south to Te Kuiti and east to Opotiki. Given its distribution overseas and the adults' ability to 'hitch' rides readily in vehicles, the spread of clover root weevil throughout NZ is inevitable.

The management of a pest like this can only be based on understanding its life-cycle and ecology. In the design of the current research programme, AgResearch scientists have used their experience with other weevil pests, such as the lucerne weevil and Argentine stem weevil, as well as drawing on the expertise of overseas researchers in the UK and USA. Finally there has been close consultation with groups such as LIC, and the Federated Farmers.

AgResearch scientists have found that clover root weevil populations behave quite differently in New Zealand compared with elsewhere. Numbers have been found to be up to ten times higher, with up to 1500/m2 larvae. Thus the clover root weevil is a far more serious pest here than elsewhere. This may be because here it has few natural enemies and plentiful food.

Possibly clover root weevil has more than one generation per year, but the combination of overlapping stages and behaviour of the long-lived adults makes the life history a challenge to unravel with still incomplete data sets. But such an understanding is essential if we are going to introduce natural enemies from overseas or develop prediction systems that can tell farmers if and when useful interventions can be made.

Environmental and economic reasons make broadcast insecticide treatments to control larvae in the soil untenable. However, AgResearch has been working with the agricultural chemical industry, investigating cost effective controls that have less impact on the pasture ecosystem, such as clover seed coating to protect seedlings during pasture renovation. The Grasslands Division of AgResearch has extensive plant genetic resources and expertise. These are being used for fast track screening to identify and select clovers and other legumes which may have tolerance or resistance to the weevil so that farmers can maintain high quality pastures for livestock.

Knowledge of the factors that regulate the pest naturally will also allow the design of control measures that augment and enhance the impact of natural enemies and other environmental regulators. Already adults have been found to be killed readily in the laboratory by a fungus present in NZ soils. Additionally farmers, through responding to a questionnaire on the impact of clover root weevil, are providing useful information. The use of fertilisers and irrigation, the timing and intensity of grazing and pasture conservation, and the choice of companion grasses in pastures, will all impact on clover persistence in the presence of the clover root weevil. Negotiations to undertake this applied research are currently in train.

There is every reason to believe that good, well-directed research coupled with input from industry will produce methods of dealing with clover root weevil. However, it is difficult to predict exactly when this point may be arrived at and what the components of management will be. It is likely, however, that the answer will lie in a number of approaches acting together rather than a silver bullet.

Ag Research has found two possible remedies for the clover root weevil.
One is a tiny parasitic wasp in Europe that attacks the weevil. Interestingly, this species of wasp is already present in New Zealand, but our strain does not attack the clover root weevil. Ag Research scientists are now breeding up the different European strains of the wasp, to find out which are likely to be most effective and wont damage non-target species.
Ag Research also found a fungus in Wales that attacks the clover root weevil by causing disease. This fungus "Beauvaria" also exists in New Zealand, but the Welsh version is ten times more active than the NZ version. Work is currently underway to turn the fungus into a pesticide.

Clover Root Weevil (CRW) has the potential to have a serious economic impact on New Zealand Dairy Farming.

If clover nitrogen has to be replaced by fertiliser nitrogen and we account for the loss of feed value that clover provides, the impact is as high as $250 per ha. using current prices.

Doing nothing could cost $560 per ha.

Any strategy to overcome the impact of CRW will have to cost farmers less than $250 per ha, assuming that fertiliser nitrogen is the cheapest and most practical strategy.

The economic impact is expected to arrive gradually. For example, at Ruakura No 2 Dairy, the control farmlet has yet to have had a significant drop in milk yield per ha despite no nitrogen being used and the loss of clover to CRW.

Farmers should be encouraged that the farming system on the Ruakura farmlet is still very profitable.

The most likely solution will be an integrated pest management (IPM), a strategy which will require several years to develop.

IPM has been successfully applied to previous pasture insect posts that have been threatened.

While IPM is developing we would recommend the following:

The way that you manage establishment of new pastures affects the amount of clover in those new pastures.

Weed plants and seeds should be effectively removed from old pastures before sowing new pastures. This will often require spraying and/or cultivating at least twice before re-sowing, and usually with one or two crops grown between old and new pastures.

Cultivation is preferred when renewing pastures damaged by clover root weevil, as most of the insects will be killed. The seedbed should be worked down so that it is fine (all rinds smaller than a 5 cent coin), level, and firm (heel marks less than one centimeter deep). On most soils this will require rolling/harrowing several times before sowing. Seed should be sown through a ' V-ring' roller drill and lightly covered with chain harrows, and rolled again (except on strong clay soils prone to 'caking'). Seed should be sown at 5-10 mm in depth.

Pastures should be sown into warm soils (above 12°C) in early March or late September.

Traditionally ryegrass/clover pastures have been sown with 18-20 kg/ha of ryegrass seed and 3-4 kg/ha clover respectively. High sowing rates of endophyte infected perennial ryegrass will restrict clover establishment. For stronger clover pastures you should consider mixes of 12-15 kg/ha ryegrass and 4-6 kg/ha clover. Red clover can also be added at 3-4 kg/ha.

It is not known whether inoculation of clover improves performance and persistence in all situations. Use bare seed, or if in doubt inoculate within 12 hours of sowing. When using seed that is inoculated and coated check that the treatment is fresh, and sow at 75% higher rates because of the added weight of the coating.

Only use clover-safe herbicides (e.g. MCPB, 2,4-DB) in the first six months, and in the long term avoid herbicides that can damage clover. If red clover is present only use MCPB.

During the first winter and spring keep grasses short (less than 12 cm) by frequent grazing, but avoid grazing when soils are wet. Don't cut pastures for silage or hay in the first year.

The occurrence of the clover root weevil (CRW) has wide implications for white clover based pastures in the ever increasing area in which C.RW is found. While there appear to be no short term solution to the problem, the use of alternative pasture species may reduce the CRW's impact on pasture productivity. Three alternative species tall fescue, red clover and chicory will be discussed here. Successful use of these alternative species depends on adjustments made to pasture management as none of these species have the ability to survive the type of pasture management applied to perennial ryegrass. The advantage is that the alternatives are deeper rooting which is reflected in a better drought persistence, they have a better summer production and their summer forage quality is higher than perennial ryegrass in summer.


* the bracketed score reflects the modern cultivars of the species


Tall fescue, a more clover friendly grass than perennial ryegrass, with up to 60 % mote clover measured in tall fescue ?white clover pastures than ryegrass ? white clover pastures. Added to that comes a better drought tolerance, grass grub tolerance and higher summer quality. Farmers have used tall fescue successfully in the Waikato and according to their observations, the key to a successful use of tall fescue is ensuring that it is never allowed to become rank, as quality and palatability will decline rapidly. The summer decline in milk solid production in far less on tall fescue than on ryegrass, resulting in a higher daily production over the summer and an extended season in relation to ryegrass.

Red Clover, a clover which does not appear to be as sensitive to CRW attack. Red clover is deeper rooting than white clover, which provides it with better drought tolerance. Red clover has also more summer and autumn production than white clover. Red clover plants develop a single seeding taproot and damage (generally stock treading in moist conditions) to this taproot needs to be avoided. Phyto?oestrogens in the newest cultivars are 65 % lower than in the older cultivars, greatly reducing the risk of problems with animal reproduction.

Chicory, a high quality, high productive forage herb, which due to its deep root system has excellent drought tolerance. Animal production levels on chicory pastures are on a par with white clover and the bulk of its dry matter production takes place in summer. As with red clover, the plant forms a single taproot and damage to this root needs to be avoided. Animal acceptance of this herb is very high, but judicious management is required to maintain this.